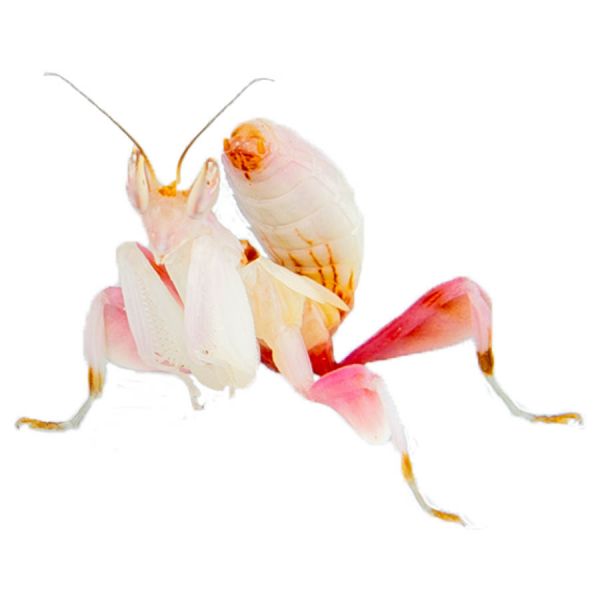 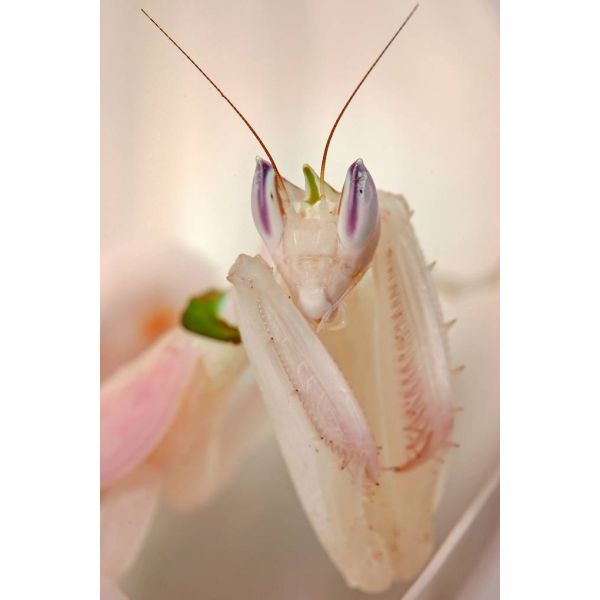 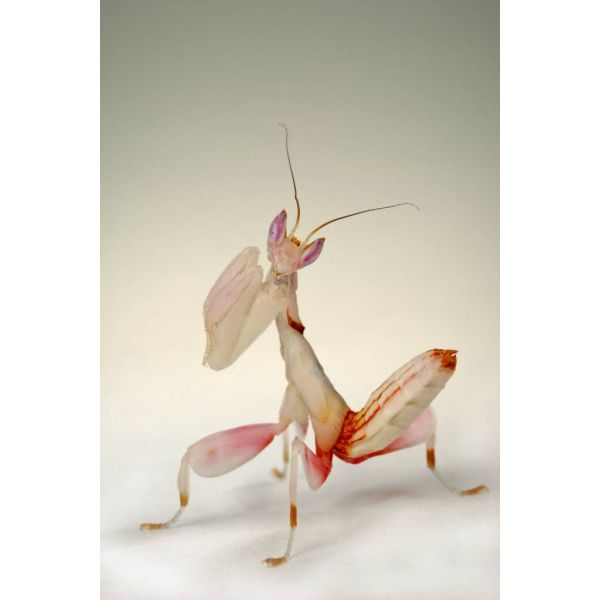 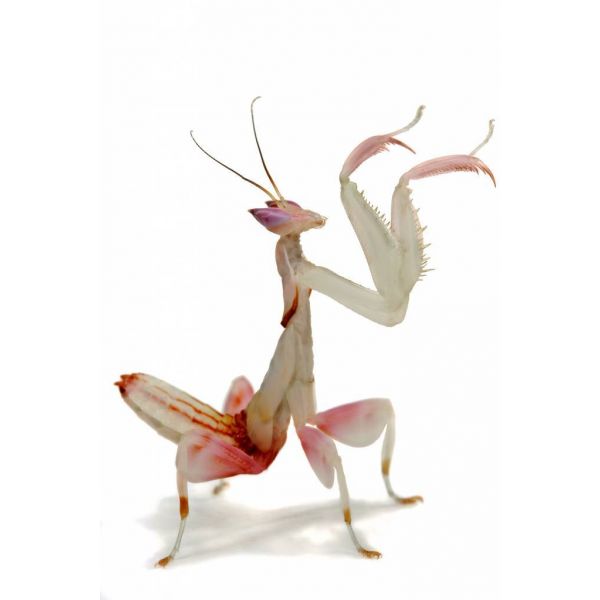 Beautiful orchid mantis, a very beautiful praying mantis by its variation in colors.

The status of the nymph is between L3 and L6. This is a difficult kind of praying mantis to keep, not suited for beginners.

Hymenopus coronatus is also known as Orchid Mantis in English. This name owes it to her pink with white appearance, which she imitates a flower. This species is highly sought after and loved because she has these beautiful bright colors and is quite large. Hymenopus coronatus occurs naturally in Malaysia.

This kind of praying mantis mimics flower leaves so she can catch bees and other pollinators that come to pollinate. Therefore they mainly stay in white with pink flowers such as orchids.

When newly hatched these nymphs are orange with a black head and black legs. After the first moult they are white with bright pink. This remains the rest of their lives, only some have more pink than others and sometimes they are completely white but this is very rare. When they mature, they have a green edge on the back that looks like a piece of a plant. It is believed that the pink color becomes more visible when the nymph is in a pink environment. A pink sheet of paper along a side of the stay would yield pinker nymphs. As an adult, they can change color within a few days , to more, or less pink.

An adult female is about 6-7 cm long, while the male is only about 3 cm. This difference cannot be missed. Furthermore, the males are smaller with slightly longer wings than the abdomen. The females are larger and have wings that run down to the abdomen.

Hymenopus coronatus is a quiet kind of praying mantis. Usually she waits for prey. They can go hunting when they detect prey.

The ideal temperature is about 28 ° C, but can vary between 25 ° C and 35 ° C. At night, it can be cooler then during the day, but at least 18 ° C. The males are to be inhibited in their growth by a lower temperature and less food. They can be kept constant at 18 ° C.
This type requires a relatively high humidity. Approximately 60 to 80% RH. The nymphs can be kept drier, they are very sensitive to a damp environment. You can best spray them 1x a week. As they get older you can up the humidity.
As with all types of Mantis, this kind needs a residence which is at least 3 times the length of the animal, and at least 2 times the width of the animal. For an adult animal this means at least 24 cm in height and 16 cm in width. A nice size for a terrarium would be 30 x 20 x 20 cm (hxwxl), so there is room for fake flowers and lots of perches.

This species, like most types of mantis, can't be housed together in a cage. Sooner or later cannibalism will strike. Especially the females are often very hungry. Males are also smaller, so an easy prey. It is therefore strongly advised to accommodate this type separately. As young nymphs  they live together, to about L3. Provided they are kept fed with fruit flies etc.

Because this kind lives on flowers, they mainly eat flying insects. It is recommended to do this again in captivity. Wild bees and hoverflies can be given as a supplement to a diet of houseflies. Crickets can also be fed, but preferably not as a staple food.

Because pollinators such as bees in the wild often carry a lot of pollen with them what is also eaten by the praying mantis, it can be good to also give them some pollen in captivity. Pollen grains can be grinded and made into a receptacle. You can, for example put the flies in the container together with the grinded pollen, shake briefly, and you're ready to feed them to the praying mantis. The proteins and additional substances in the pollen would produce stronger and healthier animals, and more offspring per egg sac.

Product questions
Customer Questions
Are you able to pick witch gender you want? , because I'm looking into getting a female but a lot of other website's are out of stock on them.

Thank you for your question. At this moment it's not possible to choose a gender. When it is possible we give you the option on our website.

Read More
Did you find what you were looking for?